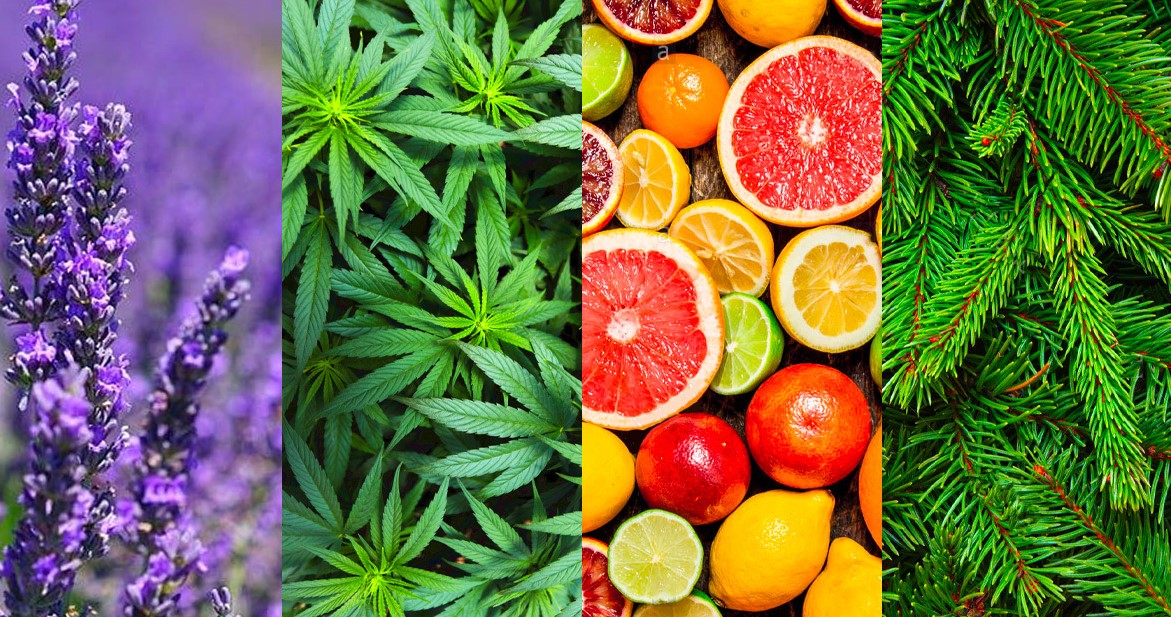 Marijuana’s effects can range from creating a sense of calm to increasing attention and energy. Terpenes are chemical substances that give cannabis its different herbal, spice, fruit, or floral scents and tastes. Scientists and marijuana smokers alike have been researching the potential advantages of cannabis terpenes in recent years, as well as the pathways by which they operate.

What Is a Terpene?

Cannabis terpenes are aromatic oils produced by the resin glands of the plant. These are the same glands that create cannabinoids, one of the active components in marijuana.

Terpenes are chemicals that give cannabis its unique fragrance. There may be anywhere from 80 to over a hundred terpenes in the cannabis plant, but they aren’t limited to it. Various herbs, fruits, and vegetation produce them as well. Terpenes are also utilized by various animals including swallowtail caterpillars, which store terpenes from host plants and use them as an repellent against predators.

When several people talk about terpenoids and terpene, they might be referring to the same things. While the two are technically equivalent, terpenoids can only be found in oxidized plant material like cannabis that has been dried and cured.

Synthetic varieties of terpenes, which are produced in a lab, can be used as food additives or to add flavor and aroma to a variety of goods. Terpenes are also responsible for the aromatherapy properties of essential oils, some of which include all-natural terpenes while others include manufactured chemicals.

What Do Terpenes Do?

The chemicals in cannabis plants, known as terpenes, give them their distinctive flavor or smell. They’re behind the unique soothing scent of lavender, as well as the citrusy, flowery, or woody tastes and scents of certain cannabis strains.

Aside from acting on the nose and tongue, terpenes have an impact on a variety of other parts of the body. While it’s long been assumed that THC is responsible for marijuana’s effects, terpenes play an important part as well. Terpenes can bind with the same receptors as cannabinoids to produce diverse effects. Because of this, understanding terpenes is especially important since it means that consumers may better personalize their high or cannabis health advantages by knowing what terpenes they’re taking.

Given that marijuana terpenes vary from one strain to the next, this (in tandem with cannabinoids) is why one strain may be highly energizing while another can produce profound sleepiness and relaxation. Researchers think that the combination of cannabinoids and terpenes may be behind marijuana’s entourage effect, which is a phenomenon in which its components operate differently when taken together rather than separately. For people seeking hemp-derived cannabinoids like CBD, hemp terpenes are an option.

Cannabis science has advanced dramatically in recent years, and for those interested in using terpenes, there are a variety of methods to do so.

The most popular technique to consume terpenes is by smoking the plant material, which is also the most common way to smoke marijuana. While cannabis smokers still appreciate each strain’s unique terpene scent and taste, it’s worth noting that the quickest method to lose a terpene is to heat it beyond its boiling point. Cannabis must be heated at extremely high temperatures in order for it to combust, so using a vaporizer is the best approach to enjoy marijuana terpenes.

Because vaporizing cannabis flower allows for more precise heat regulation, many marijuana experts prefer it to smoking. Because they can target and release specific terpenes or cannabinoids at a lower temperature and then gradually raise the temperature to cover the whole spectrum, they may do so with their vaporizer. Another technique to enjoy the fragrance and flavor of marijuana terpenes is through vaping cannabis oil.

A third option for consuming terpenes is through dabbing butane hash oil, also known as BHO. This type of cannabis concentrate consists of cannabinoids and terpenes that have been extracted from the plant material. Some concentrate producers take it a step further by creating concentrates that isolate a single cannabinoid. THC and CBD Isolates are noteworthy since they are some of the most powerful and pure concentrates available. Distillers can add terpenes back into these extracts, giving them the distinctive aromas and tastes of Sour Diesel, Tangie, or any other strain. This not only helps to enhance the enjoyability of the isolate, but it also aids in the appreciation of the cannabinoid’s therapeutic effects because of the entourage effect.

Terpenes may also be absorbed through the mouth. Many producers produce terpene concentrates that can be consumed as drops. Terpenes may be taken orally, but many people prefer to use them to make a terpene infusion for flower, hash, or concentrates before smoking or vaporizing them. A little goes a long way when it comes to terpenes; they are quite strong. Bon Appetit writer Alexandra Stafford explained how chefs and bartenders are using terpenes in addition to drops in order to create a wide range of terpene-infused meals and beverages.

While cannabis and hemp terpenes are quite similar, they can also vary significantly between strains. Each terpene has its own set of characteristics that impact the plant’s effects. While there are hundreds of terpenes in marijuana, most of the study and knowledge has concentrated on the most prevalent ones.

Clove and herbs are prominent in the terpene myrcene, which has an earthy scent and is full of herbs and cloves. Myrcene is also present in mangoes and other plants such as basil, lemongrass, and thyme. It’s the terpene responsible for marijuana’s sedative “couch-lock” effects (effects that are more apparent in cannabis strains with myrcene levels of 0.5% or higher). It’s also recognized for anti-inflammatory and pain-relieving properties.

Some people believe that myrcene enhances the absorption and activation of THC. According to internet rumors, eating a mango 45 minutes before using marijuana may enhance the effects of the THC. There are no research to back this up, however. Myrcene has a boiling point of 332°F (167°C).

Because linalool is present in lavender, it has a floral, lavender-like scent. Because linalool is found in lavender as well, anyone who is familiar with lavender essential oil will be very aware of the numerous advantages of linalool, which include anti-inflammatory, anti-anxiety, and painkilling properties. Linalool has shown promise in studies exploring its use in Alzheimer’s disease treatment. Its melting point is 388°F (198°C).

Terpinolene has a delicate, sweet floral scent and relaxes in the same way as linalool. Terpinolene also adds herbal and woody notes in addition to its relaxing capabilities. This terpene is antibacterial and antioxidant in nature, and it is found in nutmeg, cumin, apples, conifers, and lilacs. Terpinolene has a boiling temperature of 122°F (50°C).

Humulene is a sedative, earthy, woody fragrance with anti-inflammatory effects. Coriander, cloves, and basil all contain this terpene as well as hops. Its boiling point is 222°F (106°C).

Ocimene is a terpene with floral and herbal scents that combines with pine to repel pests like viruses and bacteria. It’s also a decongestant. Ocimene comes from mint, basil, parsley, pepper, and mangoes. The melting point of ocimene is 122°F (50°C).

A cannabis strain with a pungent, spicy scent and flavor is likely to have a strong dosage of caryophyllene. This terpene, like black pepper, cinnamon, and cloves, has an earthy, woody scent that adds spice. Caryophyllene relieves anxiety and tension while also reducing pain. The blandness point of caryophyllene is 266°F (130°C).

Guaiol, which is valued for its anti-inflammatory and antibacterial effects, has a distinct piney odor that has drawn comparisons to pinene (which makes sense since it’s also found in cypress pines). It’s also an insecticide. Guaiol isn’t an oil like pinene; rather, it’s a sesquiterpenoid alcohol. Its boiling point is 197°F (92°C).

Limonene is a fragrant, citrus-based oil that has been used in perfumes and medicines since the early 1980s. It’s also present in fruit rinds, as well as peppermint, juniper, and rosemary. Limonene contains anti-anxiety, anti-depressant, and anti-tumor activities as well as being an anti-inflammatory and analgesic. Limonene has a boiling point of 348°F (176°C).

Pinene is a citrus-like aroma compound that’s present in pine needles and gives the odor of fresh pine. It can also be found in rosemary, parsley, dill, and basil plants. Pinene has anti-inflammatory, anti-tumor, analgesic, and antistress properties, among other things. Its boiling point is 311°F (155°C).

Bisabolol, a chemical found in chamomile, has a delicate and aromatic scent that makes it a lovely complement to the marijuana terpenes. It’s beneficial for pain relief due to its anti-inflammatory and analgesic properties. It’s also antibacterial and antioxidant. Bisabolol has a boiling point of 307°F (153°C).

Camphene is a chemical compound that comes from the camphor tree. It has a pine-tree scent with fir needles and a woody aroma. Camphene, which is also found in strongly scented materials such as camphor oil, turpentine, ginger, and citronella, has been shown to have cholesterol lowering abilities. Its boiling point is 318°F (159°C).

Geraniol is a strong-smelling terpene that has a flowery, sweet fragrance similar to geraniums. This makes it one of the most common terpenes used in cosmetics and bath products because it can be found in geraniums. Geraniol is neuroprotective as well as having anti-tumor, antioxidant, antibacterial, and antiviral effects among its several advantages. The boiling point of geraniol is 446°F (230°C).

Because valencene is present in Valencia oranges, it’s no surprise that it has a citrusy fragrance. It’s also been proved to be beneficial against pests and has an anti-inflammatory effect. Valencene boils at 253°F (123°C).

Terpineol is a terpene in cannabis that has a green, piney scent and shares the same odor as pinene. It may be found in trees and plants including as pine trees, lilac blossoms, and eucalyptus sap. Its therapeutic benefits include anti-inflammatory, anti-tumor, and antibacterial effects. Terpineol is also used to treat anxiety. Terpineol boils at 426°F (219°C).

Pulegone, also known for its peppermint scent, is most frequently found in rosemary. It’s been researched for its fever-reducing and sedative effects. Pulegone can break down the chemical acetylcholine to help brain nerve cells communicate more effectively. It’s also beneficial for combating short-term memory loss induced by THC consumption. Pulegone has a boiling point of 433°F (223°C).

Making the Most of Marijuana Terpenes

Cannabis terpenes provide a wide range of aromas and tastes to marijuana, much like wine connoisseurs enjoy earthy, fruity, or woody notes in a Cabernet Sauvignon. Some terpenes are more powerful and provide a stronger scent and flavor while others are less obvious.

Researchers are also studying the medical properties of cannabis terpenes both alone and in combination with the cannabinoids present in the plant. So far, their research has supported the concept of a marijuana entourage effect, which claims that the components operate better together as a whole than they do separately.

Regardless matter the purpose, understanding the characteristics and advantages of each terpene is beneficial in optimizing cannabis use – whether it’s to fully enjoy a certain strain or to maximize marijuana’s medical benefits. 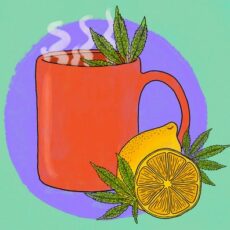 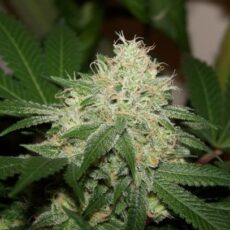