Practically anything can count as a stoner movie if you’re high enough. 18-hour nature documentary? Whoa, look at those fish, man. Somber black-and-white drama? Sure, why not! But the greatest stoner flicks have something more – a certain sticky green magic that makes you crack up laughing like the very first time you saw them, even on your ten-thousandth viewing. Read on for our definitive list of the greatest works of pothead cinema. Truth be told, most of them are pretty hilarious even if you’re completely sober. But they’re definitely way funnier if you’re not.

When you think of a stoner film, what comes to mind? Is it a couple of potheads questing for the perfect meal? Maybe some hazy buddies, lost in a cloud of smoke, just trying to find their car? But then where do these stoner archetypes leave all of the THC-soaked noirs, or the experimental films made better when viewed through marijuana goggles? Hell, where does it leave the outdated morality tales that propagated exploitation cinemas in the late 1930s?

The fact is there are no Dogme 95-style rules as to what constitutes a stoner film or not. And by focusing on the stereotypes of the subgenre, we’re actually narrowing our vision of what these niche films can actually be. Personally, I find that the stoner film encompasses what the viewer brings to it. Namely, cannabis. But also an array of expectations that prime us for the film experience we’re looking to have.

You can find out How Long Do Edibles Last here!

Stoned has always been a catch-all phrase for the effects of any number of illicit substances, so while marijuana is smoked during Roger Corman’s The Trip, the titular journey in question is thanks to some heavy tabs of acid that a younger-than-you’ve-ever-seen-him Peter Fonda drops with the help of a bearded Bruce Dern and Dennis Hopper at his hippiest and dippiest. The plot is slim: Fonda is a movie director who, upon hearing his wife is having an affair, drops some acid to work through his feelings. And it takes place completely within Fonda’s trip, so don’t expect much of a narrative. Though it really doesn’t matter. The movie is an absolute spectacle. The truly striking imagery is said to be, in part, thanks to Corman and crew tripping out on their own before the shoot. If this is what Roger Corman sees while high, it’s no wonder that he’s made a career of producing and directing some of the most daring, and wacky, films to ever come out of Hollywood.

Marijuana makes your attention span spread, so if you don’t have a watchful eye, you may be wondering what time period Cabin Boy is set in. Sure it’s got a Manifest Destiny spirit, but then what’s with the limousines and the 40oz’s? One blink, you see a real seaside port; the next, you’re transported to a huge studio set with a beautifully colored cyclorama. It’s hard to keep track, but it doesn’t really matter when you get lost in this wacky world from the mind of Chris Elliott. Adhering to an Adult Swim sensibility that leans on the random humor of the early ’90s, Cabin Boy is a silly romp filled with rapid-fire jokes alongside visually striking cinematography and production design, including some really fun usage of miniatures. And while Tim Burton opted to direct Ed Wood instead of this, his thumbprint is still all over this movie. If you’ve always wanted to see Russ Tamblyn play a shark person or David Letterman selling sock puppets, then Cabin Boy is tailor-made for you.

Brad Pitt’s finest moment? Hard to argue. He’s barely recognizable as the burnout with the bong on the couch – the inspiration for James Franco’s role in Pineapple Express. (Nothing wrong with Patricia Arquette, either.) His Floyd is a sage, whether he’s mumbling at the TV or inviting a posse of gun-toting Mob killers to smoke a bowl.

Stoniest moment: Let’s give Floyd the last word: “Hey, get some beer and cleaning products!”

The crown jewel of Snoop Dogg‘s cinesplifferamic oeuvre. He stars as Captain Mack, the pilot of this airborne hooptie, flying the friendly skies with a weed-and-‘shrooms diet. “This is your soul-plane chauffeur, Captain Antoine Mack, speaking. Welcome aboard NWA Flight 069 from the 310 to the 212. . . . We fuckin’ higher than Redman at the Source Awards!”

Keanu Reeves takes up permanent residence in the stoner-flick Hall of Fame, although not even The Matrix or Point Break took him this far into the zone. As he and his buddy go traveling through time, the blankness all over his face made people marvel at his subtle acting. Maybe it wasn’t acting? Whoa!

Stoniest moment: Bill and Ted go back in time to meet Socrates (you know, “So-Crates”) and blow his mind by philosophizing over “Dust in the Wind.”

Texas small-town teens in the summer of 1976, breaking free in muscle cars on the last day of school. Richard Link­later gets the Seventies details right – including how these kids spend practically every minute blazing to Aerosmith and Foghat, arguing about aliens, sex and how much weed George Washington smoked.

Stoniest moment: Matthew McConaughey shows up as Wooderson, a guru behind the wheel of his beloved hot rod Melba Toast, cruising to the next fiesta: “The older you do get, the more rules they’re gonna try to get you to follow. You just gotta keep livin’, man. L-i-v-i-n.”

Critics Consensus: Featuring an excellent ensemble cast, a precise feel for the 1970s, and a killer soundtrack, Dazed and Confused is a funny, affectionate, and clear-eyed look at high school life.

Synopsis: Like George Lucas’ American Graffiti, Richard Linklater’s Dazed and Confused is an affectionate look at the youth culture of a…

The Dude (Jeff Bridges) is the greatest stoner in the history of film because the Dude abides, dude.

In what might be the only stoner action movie, two unlikely doobie brothers, process server Dale (Seth Rogen) and groovy dealer Saul (James Franco), bond over the ”dopest dope I ever smoked,” the potent Pineapple Express, while being chased by corrupt cops.

You can find out How To Grow Cannabis Outdoors here! 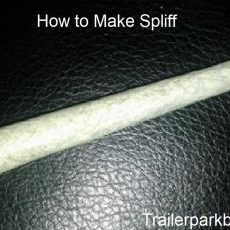 How to Make Spliff: The Complete Guide

Can Weed Cause Stomach Pain